Ikeda moved from Tokyo, Japan to Rome in the 1970s. There he attended Venanzo Crocetti's lectures at the Academy of Fine Arts where he graduated in 1977. In the eighties he met Simonetta Lux, who invited him to participate in the collective exhibition named "Simultaneity - New Directions Japanese Contemporary Art" at Palazzo Braschi, (1991).

In 1989 he had an eponymously named solo exhibition, at the Gallery Lunami (text Masaaki Iseki) in Tokyo, curated by Emiko Namikawa. In 2011 he had an exhibition at TOKI Art Space, Golden Fleece - Jason The beautiful Medea, curated by Noriko Toki. In 1997 he participated at the third festival of art and poetry in Bomarzo Spells. Scenes of art and poetry. NEAR conceived by Lux and Miriam Mirolla, (Museum of Contemporary Arts Laboratory at the University of Tuscia), Palazzo Orsini. On that occasion he met many artists who play an important role in the Italian art world, including Gianfranco Baruchello Fabrizio Crisafulli, Giovanni Di Stefano, Andrea Sheets, Stefano Fontana, Robert Gligorov, Jannis Kounellis, Renato Mambor, Fabio Mauri, Hidetoshi Nagasawa and Achille Perilli.

In 2010 he exhibited at the gallery Hybrida Contemporanea, Rome (exhibition) Jason and the beautiful Medea curated by Emanuela de Notariis. In 2011, The Artist as Rishi appeared at the G. Tucci Museum of Oriental Art, Rome curated by Lori Adragna and Mary Angela Schroth from an idea of Adragna and Enzo Barchi. In 2012 he exhibited at the gallery EMBRICE Post-structures: lines, wires, mazes of Uemon Ikeda curated by Lux and Carlo Severati with Carlo Tomassi: a video performance The Tatsuo Childhood on YouTube and Emma Tagliacollo's interview of Ikeda. He participated at the 13th annual European Day of Jewish Culture that took place on 2 September 2012. The theme was The Spirit of Jewish Humor. For the occasion Ikeda presented an installation featuring spatial geometries with a thread of blue wool and silk depicting the Star of David.

In April 2013 his installation To Have or not to Have at Capitoline Hill was displayed on Earth Day. The project was curated by Francesco Gallo Mazzeo and Studio Marta Bianchi. He joined the retrospective exhibition: Portrait of a City # 2. Art in Rome 1960 - 2001 project that after its first exhibition (November 2012 - April 2013), continues the study of contemporary art in Rome from 1960 to 2001. Ongoing from 16 May until 15 September 2013 to the Museum of Contemporary Art of Rome headquarters on Via Nizza 138 in Rome. On the occasion of the Day of Contemporary Art Oct. 5, 2013[2] - Installation: Uemon Ikeda. Aerial architectures: lines, wires, web net MAXXI - National Museum of the 21st Century Arts.[3][4] A great red spider's web, made of wool and silk, was to cloak the museum piazza.[5]

Ikeda's work was supported by critics Masaaki Iseki, director of the Tokyo Metropolitan Teien Art Museum, by Simonetta Lux and by Carlos Spartacus. 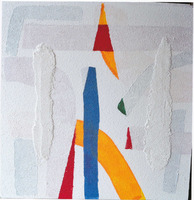 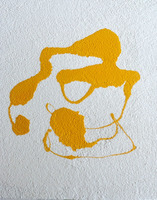 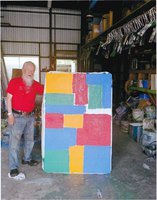 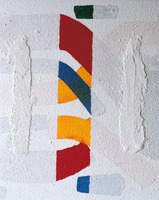